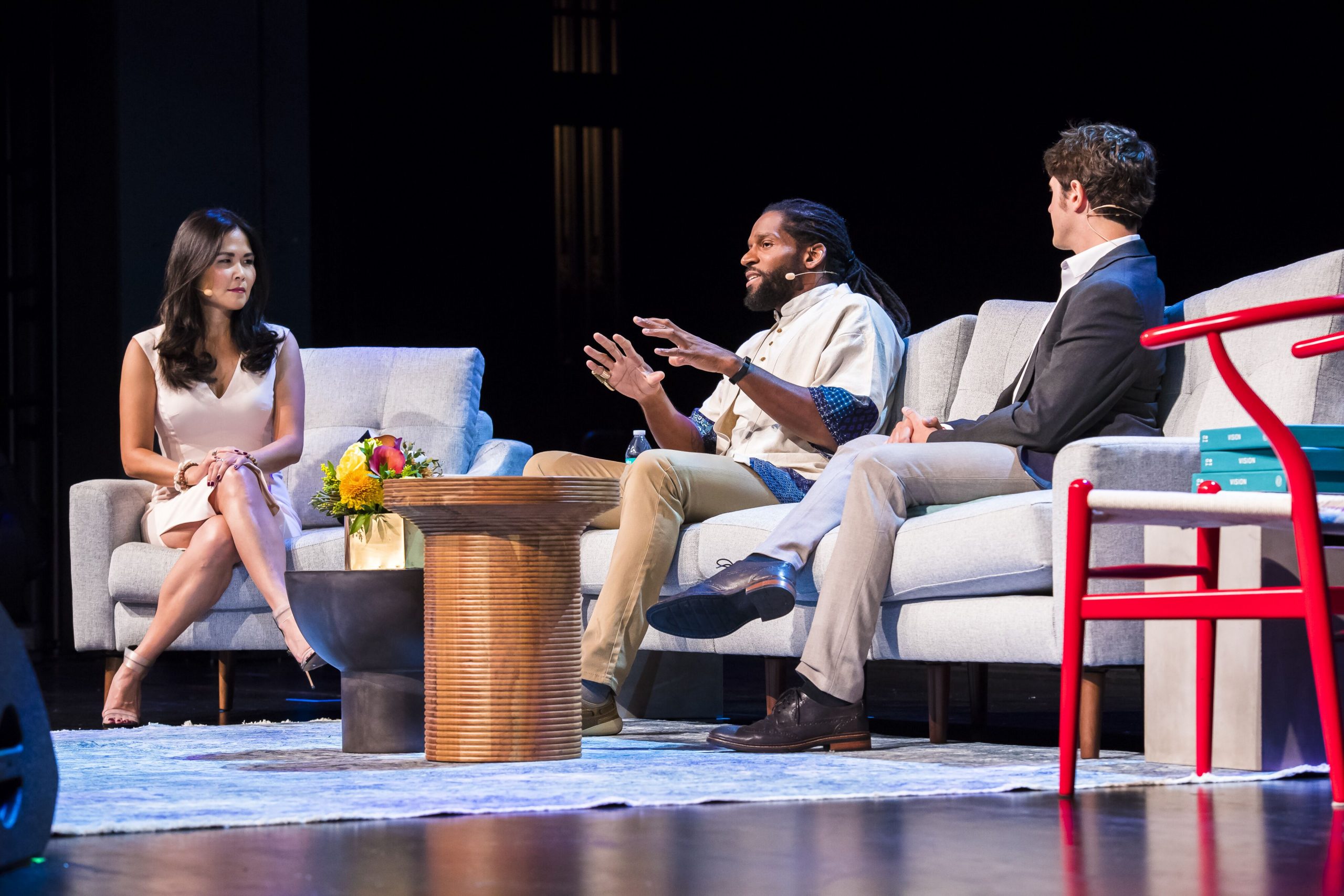 The world is undergoing a global evolution which is integrating developments in biology,materials and information technologies at an accelerating pace. The future of how humans relate to and intertwine with technology and machines is being defined at this very moment. It raises many fundamental and ethical provocations, like how might society seek to shape evolution and governance around technological innovation, and the boundaries between man and machine? We are witnessing dramatic digitization, automation, virtualization and robotization, in all sectors of society, governments and business. Through ideation and conversations focused on several parallel phenomena, we are perpetually exploring where we have been, where we are now and where we are going as a human species.

Ever since humans first realized consciousness, they began to dream, connect to other animated and inanimate objects, alchemizing those visions and drawing upon the material world to bring subconscious stories into reality. From these dreams, humans began to translate these visions, call upon the elements they understood and develop skills and processes that generate a myriad of outputs to form extensions of themselves. With these new combinations of understanding, processes and material, the final product could be utilized and mobilized by the creator and/or other humans. Within these processes, it would be assumed the creator would have to maintain some sense of intimacy and comprehension of the elements in use, in order to create the desired outcomes of the vision.

As an orientation, the word technology derives from the greek word ‘techne’, which for all intents and purposes means the science of crafting or the knowledge and skill of delivering techniques. By all means, systems applying technology take an input, process it according to the design, and produce a desired outcome. For example, fire itself is merely an element within the natural world, but the advent and process of controlling fire, turned it into a technology.

As we fast forward from the first recording of human consciousness to the 21st Century, we are now living in the information or digital age. We have created tools and applied processes for ourselves and other beings. The advancement and utilization of these technologies have manifested in positive and negative ways. Humans have extended and caused extinction of life, allowed people to become more dynamic and docile, travel and stay in place, degrade and regenerate, extract and replace, and with relative ease communicate and isolate. As my friend, business partner and Cyborg Shamanist Adah Parris states, most of these dichotomous outcomes have been perpetuated or highlighted through the context of colonialism (conquer, divide, rank), capitalism (the strategy by which to maintain colonialism) and climate change ( the result of each of these driven by the ego)(Parris, Adah 2019).

Within this age of uber technology, a question to be posed is, what is next for intimacy, not only between humans and machines, but more importantly between humans and humans, and humans and the natural world? The global society has become self-referential and this has impacted our view of our place in the world, our approach to solving problems, relating to one another and telling stories.

While dean at MIT of the faculty of science and engineering, the American historian of technology and science, Rosalind Williams stated, “…engineering exists in a hybrid world in which there is no longer a clear boundary between autonomous, non-human nature and human generated processes. Institutional authorities are also losing their boundaries and autonomy.” In the current age of interwoven and integrated technology within human systems, there is a new paradigm which is creating a “hybrid imagination”, where there are new combinations of scientific knowledge and technical skills from different fields and social domains (Jamison, Christensen, Botin 2015 ).

Technologies such as clothes, language, medicine, vehicles, smart phones and material structures, have been a way for us to stay safe, live longer, mobilize and communicate in almost real time and seamless ways. With the global pandemic touching everyone in the world, directly or indirectly, there has been an acute realization that we are all connected and share a place and part within the natural world. Yet the proliferation of social distancing, lockdowns, mask wearing and isolation has accelerated social tensions, dichotomous political viewpoints, splinters in real life relationships and an influx of human and technological interaction.

Businesses and humans alike are having to acutely shift the medium and techniques in which they conduct their relationships internally and externally. More concretely, businesses and consumers have accelerated their spending and earnings that were projected to be 5 to 10 years in the future. To extend that thought, models of business are rapidly shifting, where companies are increasingly aiming to engage in monogamous relationships with their consumers through bundled subscription models, customized marketing and surveillance data. Businesses are now equating value by how long you are willing to pay attention to their platform and stay loyal to that relationship. From there that relationship is tracked and documented through your digital footprint and being monetized. Transactions of value are now expressed through influencing consumers spending habits, push notifications and targeted advertisements. In lamens terms, human behavior is now the most sought after commodity being sold and traded to targeted bidders.

As a Cyborg Anthropologist, I focus on the intra-connections between humans and machines, and how these phenomena play out in social, economic and environmental contexts. The other day I was speaking with my friend Marjorie Paillon, discussing the slow and rapid changes in intimacy, given the proliferation of restrictions from the global pandemic. The context emerged from highlighting the immediate increase of zoom calls and online conferences and the lack of accessibility to travel and physical mobility to certain parts of the world. This conversation brought to mind a concept that deserved further exploration, which questioned what the future of intimacy looks like in the digital space. From that idea we came up with a seemingly new word called ‘Digitimacy’. Which is meant to be understood as intimacy through a digital platform, technological device, online software or technical process.

Western modernization has been characterized by an increasing reliance on technology, and by the emergence of a view which sees technology as the driving force of history. We are at a point in time where very few people have given critical thought to new social realities created through the intra-actions of technology and what those realities mean for the individual and society. The relationship between humans and technology undergird a larger narrative that can be exploited systematically to suit the whims of social, political, and/or cultural needs.

On a human to human level, we are generating and maintaining our intimate relationships, through the juxtaposition of digital connectivity, social media, lockdowns, isolation, and social distancing. People have embodied unintended stressors like illness-related anxiety, acute grief in relation to losing a loved one, isolation and loneliness, domestic violence and financial stress. Each of these scenarios decrease the potential for intimacy. When it comes to sex and relationships, the pandemic is creating barriers to people connecting and expressing prolonged connection. A recent online survey found that a majority of participants in a sample of 1,559 adults reported a decline in the quality of their sex lives (43.5 percent) during the global pandemic, while only a minority reported improvements (13.6 percent) (Lehmiller J. et al 2020).

For some, the global pandemic is synonymous with loneliness and relationship stress. Many people end up choosing between intimacy and security, where singles looking for romantic relationships end up subjected to celibacy, while couples experience tensions related to forced isolation. A Pew study in May, 2020 stated, “among partnered adults in the U.S. — that is, those who are married, cohabiting or in a committed relationship, roughly half (51%) say their partner is often or sometimes distracted by their cell phone while they are trying to have a conversation with them, and four-in-ten say they are at least sometimes bothered by the amount of time their partner spends on their mobile device.”

Intimacy can definitely be achieved through the medium of a machine and/or online platform. It can also be experienced in online social interactions and distractions from real life intimacy, which has real consequences on influencing the health and well-being of an individual. Surrounding this topic, my scope of interests range from newborn’s exposed to technology from infancy, to the elderly having to take their last breaths with family members being mandated to watch from an online communication platform due to hospice or hospital restrictions. As I looked further, I soon realized research into the relationship between digital intimacy and well-being is critically limited.

This article is intended to provoke, spark discourse and motivate additional research concentrated on the concept of ‘Digitimacy’ and what that entails. What will become the social norms, the technological innovations and consequences that will surely arise from the ascension of technological driven relationships? I look forward to a continued exploration of successes, failures and new ways to conduct our expressions of deep connection and closeness.